Issue No. 14 Table of Contents

WAN KAM LEUNG
Striving for Perfection
By Kleber Battaglia
Born in 1945 in Po On village in the Guangdong Province of Southern China, Sifu Wan Kam Leung’s interest in martial arts began at a very early age, and by his teens, he was learning various traditional styles of Gung Fu from masters in and around neighbouring villages. He was first introduced to Wing Chun by his brother, and around the year of 1958/59 when he moved to Hong Kong, he started to learn Wing Chun from the late Sifu Leung Sheung for around half a year. Sifu Wan has trained Wing Chun for more than 50 years and is widely known to be one of Sifu Wong Shun Leung’s most senior students and, ironically enough, the one who modified the Wing Chun his Sifu taught him into something completely different and unique. Under the full consent of his Sifu, he decided to call it Practical Wing Chun.

SECOND NATURE
Chi Sau Trapping
Hit without Being Hit
By Wayne Belonoha
Of the many skills that are trained in Wing Chun, trapping is very important to keep the practitioner safe in a combat situation. Sifu Wayne talks about the Chi Sau drills, Doc Sau and Gor Sau, and how to improve the key skill of trapping.

MOON POINTING FINGER
Reading Between the Lines
Key Concepts & Maxims of Wing Chun (Part 2)
By David Peterson
Sifu David takes a much closer look at three more of the Key Concepts in an effort to enhance your deeper under­ standing of what Wing Chun can offer to the practitioner.

ACADEMIA WING CHUN
Wing Chun’s Concept-based Footwork
By Sergio Pascal Iadarola
Many consider footwork to be one of the most important aspects of the Wing Chun system. It is also one of the few aspects that tends to differ substantially between lineages.

THE INTERCEPTING FIST
What’s In Your Toolbox?
By Lamar M. Davis II
Bruce Lee always referred to the hands and the feet as “tools of the trade”. These tools must be continuously sharpened and developed in order for them to remain fully functional and ready to apply. What are some of your favourite tools?

LO MAN KAM
Keeping the Art Alive
By Marc Debus
As a youth, Sifu Lo Man Kam spent much of his time living with his uncle, the late Grandmaster Ip Man. Now, at over 80 years of age, he still progresses even further in Wing Chun, continually seeking to expand an already profound understanding of the art.

THE WING TSUN LONG POLE
A Fusion of Original & Modern
By Alex Richter
Using the historical Tang Sang footage as a reference point, Sifu Alex examines the theory, structure and techniques of the modernised WT Long Pole. The original footage of Ip Man’s Long Pole techniques reveal what has been changed and what has also been preserved throughout the years.

WING CHUN’S MUI FA JONG
Steps On the Posts
By Simone Sebastiani
The Mui Fa Jong is considered to be one of the oldest training tools and is practised in many different styles of Gung Fu, however, their configuration and usage are often completely different from the original interpretation, movements and concepts that are commonly seen within the Wing Chun system.

DANA WONG
Discovering Your Hidden Abilities
By Kenton Sefcik
Sifu Dana Wong has been involved in Wing Chun for over 40 years in total. Previously a Chief Instructor at the Traditional Wing Chun Headquarters in Melbourne, he has since travelled to Foshan to learn from the late Sifu Kwok Fu and also his son, Sifu Kwok Wai Jarn.

CHUM KIU PIVOTING
By Derek Evans
Using the wheel instead of reinventing it, Sifu Derek takes a closer look at the mechanics behind the Chum Kiu pivot.

BODY STRUCTURE
Will the Real Baat Jaam Dao Please Stand Up
By Dr. Robert Chu
Baat Jaam Dao is a beginning into how Wing Chun is applied effectively with weapons. Ip Man passed down multiple Baat Jaam Dao sets, just like the Muk Yan Jong. Over Dim Sum, Ip would often demonstrate a few movements with chopsticks and discuss the basic outline of the form.

THE INQUISITIVE HAND
Wing Chun: Science, Art or Craft?
By Alan Gibson
Learning Wing Chun is an intricate process of chipping away the superfluous and polishing our actions to a specific purpose.

THE HIDDEN FORMS
A Punch is not Polite
By Dr. Matthew Mills
Training for violence and actually facing it are two very different things. Dr. Mills examines his personal experience of a physical assault, secular trends in social violence including the reasons underpinning it, and the lessons to be translated into realistic training.

SCREEN FIGHTING
In this issue, David Peterson reviews the following movies: The Grandmaster, Young & Dangerous: Reloaded, and Journey to the West. 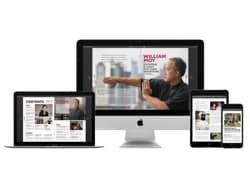 Subscribe today for 6 issues published in a year, plus INSTANT ACCESS to 10 years of back issues (value $426). NO LINEAGE POLITICS! Read on iOS, Android and Desktop. 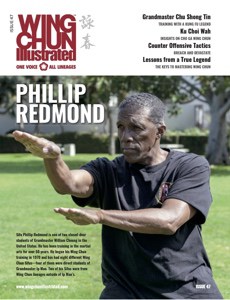 Read the entire Issue 47 featuring Sifu Phillip Redmond for FREE. Read on iOS, Android, and Desktop. No sign up required.