Issue No. 19 Table of Contents

PHILIPP BAYER
The European WSLVT Connection
By Dave van der Poel & David Peterson
Sifu Philipp Bayer first became involved in the martial arts in the early 1970s. Eventually, he was attracted to the Chinese art of Wing Chun, but following the loss of his left hand in 1980, it looked as if his opportunity to train was over after his then instructor declared that he was no longer teach-able due to his injury. Philipp decided to travel to Hong Kong to seek out an instructor who would teach him, but after visiting various instructors, Philipp did not find the satisfaction he hoped for. That is until a chance encounter with a man who suggested he visit the school of Sifu Wong Shun Leung. Sifu Wong sat down with Philipp and discussed the situation, devising ways to enable the determined German to get the most from his training despite his handicap, and in January of 1983, Philipp formally became a student of WSLVT.

SECOND NATURE
Reaping the Benefits
Giving Hands to Your Partner
By Wayne Belonoha
Accelerate your skill growth by taking advantage of technical flaws in your partner’s technique and understand how helping your partner to improve will fine-tune your skills.

MOON POINTING FINGER
Personal Protection Concepts
Learning to Fight without Fighting (Part 4)
By David Peterson (co-written with Rolf Clausnitzer & Andrew Williams)
Dealing with the threat of real violence goes beyond practising Wing Chun. Knowledge of the emotional and physical effects involved, and the development of a raised sense of awareness to avoid violence, are crucial to survival.

KEEPING IT SIMPLE
Can I Represent Your Organisation in my Country?
By Shaun Rawcliffe
Sifu Rawcliffe shares his personal views on why he believes it is impossible to allow any person or organisation to represent him.

THE INNER CIRCLE
Emei
The Mother System (Part 1)
By Jim Roselando Jr.
Why was Wing Chun the unique, high-tech art of its time? Why is our oldest writing rich with Emei and Fujian signatures? Sifu Roselando answers these questions.

THE INTERCEPTING FIST
Solo Training (Part 2)
By Lamar M. Davis II
Too many martial arts practitioners seem concerned about what others think they are doing. Solo training assures that you get what you need, not what others think you need.

PUI YEE
Wing Chun through a Woman’s Eyes
By Kleber Battaglia
A woman supposedly created Wing Chun; however, it is still very rare to see women reach a high level of skills in our beloved art. One such exception is Sifu Pui Yee, a woman who has dedicated her entire life to Wing Chun.

SUKI GOSAL
His Dark Side of Gung Fu
By Kenton Sefcik
While others are relentlessly pushing their dogma, or trying to sell something, Sifu Suki Gosal has a refreshing approach to his rare lineage of Ban Chung Wing Chun.

A SEA OF (MIS)INFORMATION
What is the Wooden Dummy to Wing Tsun?
By Carson Lau
There are many variations of what the Wooden Dummy form looks like, and the interpretation of techniques, sequences, and even the purpose of a sequence can widely differ—even within Wing Tsun, there are numerous variations depending on whom you learn from.

SELF-CONTROL IN EXTREME SITUATIONS
By Igor Tunik
Our body’s natural reaction to extreme situations has stayed the same for millions of years—a person will either freeze, try to flee or wildly attack the source of the threat.

BODY STRUCTURE
On Momentum
By Dr. Robert Chu
Sun Zi’s The Art of War speaks of Momentum. In Wing Chun, after developing Form and Structure as well as Force Handling, we emphasise Momentum. We know how to “borrow force”, or “add to forces”, so that when the opponent commits, we exploit their momentum, only to have them fall into our trap.

THE INQUISITIVE HAND
Health and Safety
Why Correct Posture Matters
By Alan Gibson
People often mock Health and Safety regulations, but anyone who has had a bad back will appreciate the true need for education. Gung Fu is designed to cultivate all-round robust health and there is a strong link between Manual Handling techniques and postural use in Wing Chun.

DECODING WING CHUN
Wrong Bong
By Danny Xuan
Wing Chun practitioners often refer to a Bong Sau executed diagonally, i.e., a left Bong arm intercepting the opponent’s left punch, as a Wrong Bong, and even have follow-up techniques for it. The truth of the matter is that most practitioners’ right Bong is already wrong.

IN PRINT
In this issue, Tony Massengill reviews the following books: Jeet Kune Do: Pure and Simple by Jason Korol and The Little Black Book of Violence: What Every Young Man Needs to Know About Fighting by Lawrence A. Kane and Kris Wilder.

SCREEN FIGHTING
In this issue, David Peterson reviews the following movies: The White Storm, Iceman, and From Vegas to Macau.

Subscribe to the Wing Chun Illustrated Newsstand today for SIX NEW ISSUES and get INSTANT ACCESS to the latest one featuring Sifu Mark Stas, as well as all 51 BACK ISSUES. Read on iOS, Android and Desktop.

The Print Edition of Issue 52 is now available 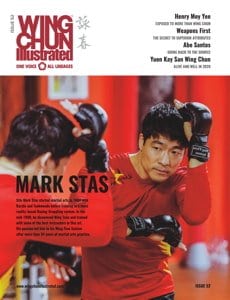 This seal of trust is provided via Sucuri's Website AntiVirus product. The 24/7/365 monitoring service being employed offers you peace of mind that our website is clean and malware free.